Yesterday, Feb. 12, we had an unexpectedly appropriate snow day! Our university (where Robert and I teach and are pursuing our advanced degrees) announced at 2:30 p.m. on Thursday that it would close on Friday in anticipation of snow. There were a number of rolling eyes and groans for various reasons–some people thinking the university jumped the gun on closing down, others not taking the snowstorm (and subsequent ice) seriously. Sure enough, for once, our university made the right decision for the right reasons. It snowed heavily from 9:40 a.m. until about 5:30 p.m., and we totaled around 3 inches (according to a measuring tape on our patio table). Below are some of our pictures from our snow day. 🙂

This is a bench in our backyard. This picture was taken around 1 p.m., when the snow had fallen long enough to cover the ground. 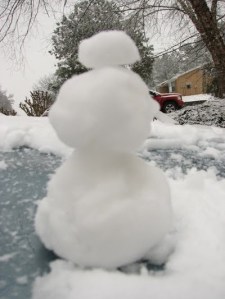 Robert and I had never built a snowman together before (despite the fact that we have, indeed, been together in snowy conditions, including a vacation to Breckenridge a couple Christmases ago). This is our very first snowman, and he is on the hood of my car. Er, was. I smashed him so that we could use that snow for a larger car snowman…but that effort ended in disaster. And a snowball fight. 🙂

This is our youngest cat, Beatrice, watching as the snow started to fall around 9:30 a.m. It’s difficult to see the snowflakes in this picture, but they were there and Bea Bea was captivated by them.

Callie, a couple years older than Bea Bea, wanted to watch too. Her picture was taken around noon, so you can see the snow is starting to accumulate better.

This is our darling naked man, Milton. We didn’t keep him out there for long, but he seemed to enjoy himself. His picture was taken around 1 p.m. when the snow finally blanketed our backyard.

Robert and I went to an ecology preserve near our house with some friends, one of whom is an aspiring photographer. She generously gave me this picture to share–it’s currently set as my desktop as well. We had such a great day in the rare, beautiful snow! This picture was taken around 2:45 p.m.
We’ll be sad to wake up tomorrow to a muddy world, but it is our reality. Our backyard looks a little gross and sludgy, but it’ll be warm enough to dry tomorrow afternoon. Robert and I have kept ourselves fairly distracted from the melting snow today–we enjoyed watching some of the first games of the Winter Olympics, and we also played a workout of EA Active for the Wii. So much fun! 🙂 We actually had to turn on the A/C for a few minutes to help us cool off afterward.
All-in-all, I would say that our first married snow day was a great deal of fun! 🙂

You are currently reading Unexpected snow day at A.Hab.'s View.