Only one word can describe the meal Robert and I prepared together for our second anniversary: scrumptious!

Robert grilled steaks that had been rubbed down with olive oil and a dry steak rub while I cooked potatoes au gratin (and used a mandolin slicer for the very first time–I liked it!). Dessert was finished in time to put the potatoes into the oven.

As we were setting the table, I realized that we had forgotten a veggie. Oops.

The delicious, deep red wine featured here is a Tempranillo by Biltmore. If you’ve never had it, I think it’s freaking amazing. We had been saving it from our trip to the Biltmore with our friends back in September. It’s extremely robust, dry, and blooms all the way down. Like I said, I adore it!!

For dessert, we had a yummy cinnamon swirl coffee cake, which I had never made before. In fact, I had just found the recipe on-line that afternoon. It was so delicious.

And here’s the inside: 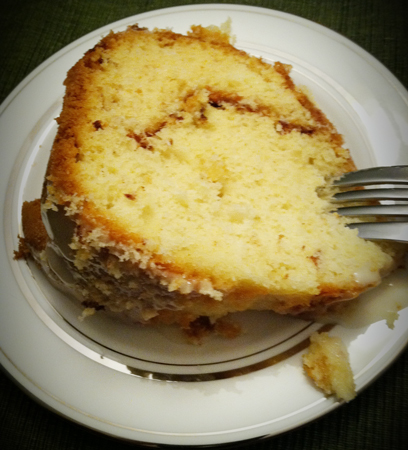 OMG, can I have my dessert before dinner tonight, please??

The dark line you see there is the cinnamon “swirl.” Sure, it didn’t really swirl but whatever. It’s in there and it’s delicious. The recipe calls for a cinnamon and granulated sugar mixture for the swirl. I read some of the comments and chose to go with a cinnamon and brown sugar swirl. I think the color contrast is really appealing, and the flavor is incredible!

I also used Swan’s cake flour instead of all-purpose flour. I found the cake to be crumbly, but I think a lot of coffee cakes are pretty crumbly. (I can’t imagine what it would have been like if I had used AP!)

Last night, I went to bed with a full and happy tummy. And maybe I was a little bit tipsy, too. Just a perfect anniversary!

You are currently reading Scrumptious Second Anniversary at A.Hab.'s View.