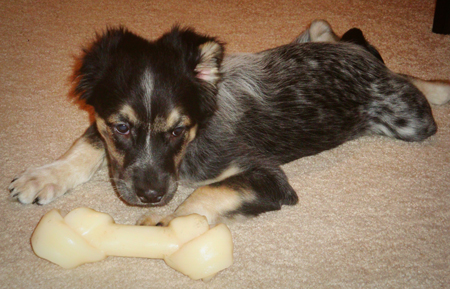 Annie chewing on Milton's bone, despite having a "baby bone" her size.

Full Name: Sophie-Anne or “Little Orphan Annie,” depending on who you ask.
Robert and I have a habit of naming our animals after literary figures, either authors or characters. I had originally wanted to name our next pet following my Shakespearean character pattern. But when we met Annie, we knew she wasn’t a Rosalind or a Viola. Those names just didn’t suit her. We ultimately agreed on Annie while we drove home from the shelter.

Story: Annie is the first pet that Robert and I adopted together. We had been talking about getting a puppy for a while (even before we were married), and Robert had insisted that the puppy be primarily “mine.” Well, if I was going to get the puppy I wanted, then I really wanted an Aussie. One day in August 2010, we decided to finally go for it, and we visited four shelters, each one a disappointment in its own way. We were going to head home when we decided to visit one more on a last ditch effort. That shelter was the cleanest, most comfortable shelter I’d ever been in–and it’s the one that had Annie. The moment I laid my eyes on her, I wanted her. The staff took the three of us to a puppy adoption room to let her walk around and play with us. She had the best temperament and was incredibly sweet. We adopted her then, took her home, and introduced her to Milton, Callie, and Beatrice.

Annie is a precious addition to our furry family. She learns commands faster than I ever imagined she would, thanks to her innate curiosity. She seems genuinely interested in learning, and I love teaching her whatever I can. Annie is such a sweetheart, and every day I am glad we adopted her.

She really is all leg.